In the previous two sections, we looked at the definite integral and its relationship to the area under the curve of a function. Unfortunately, so far, the only tools we have available to calculate the value of a definite integral are geometric area formulas and limits of Riemann sums, and both approaches are extremely cumbersome. In this section we look at some more powerful and useful techniques for evaluating definite integrals.

These new techniques rely on the relationship between differentiation and integration. This relationship was discovered and explored by both Sir Isaac Newton and Gottfried Wilhelm Leibniz (among others) during the late 1600s and early 1700s, and it is codified in what we now call the Fundamental Theorem of Calculus, which has two parts that we examine in this section. Its very name indicates how central this theorem is to the entire development of calculus.

Isaac Newton’s contributions to mathematics and physics changed the way we look at the world. The relationships he discovered, codified as Newton’s laws and the law of universal gravitation, are still taught as foundational material in physics today, and his calculus has spawned entire fields of mathematics. To learn more, read a brief biography of Newton with multimedia clips.

Fundamental Theorem of Calculus I

Second, it is worth commenting on some of the key implications of this theorem. There is a reason it is called the Fundamental Theorem of Calculus. Not only does it establish a relationship between integration and differentiation, but also it guarantees that any integrable function has an antiderivative. Specifically, it guarantees that any continuous function has an antiderivative.

Example \(\PageIndex{3}\): Finding a Derivative with the Fundamental Theorem of Calculus

Use the Note to find the derivative of

Solution: According to the Fundamental Theorem of Calculus, the derivative is given by

Use the Fundamental Theorem of Calculus, Part 1 to find the derivative of \(\displaystyle g(r)=∫^r_0\sqrt{x^2+4}dx\).

Follow the procedures from Example to solve the problem.

Example \(\PageIndex{4}\): Using the Fundamental Theorem and the Chain Rule to Calculate Derivatives

Use the chain rule to solve the problem.

We have \(\displaystyle F(x)=∫^{2x}_xt^3dt\). Both limits of integration are variable, so we need to split this into two integrals. We get

Differentiating the first term, we obtain

Use the procedures from Example to solve the problem

The Fundamental Theorem of Calculus, Part 2, is perhaps the most important theorem in calculus. After tireless efforts by mathematicians for approximately 500 years, new techniques emerged that provided scientists with the necessary tools to explain many phenomena. Using calculus, astronomers could finally determine distances in space and map planetary orbits. Everyday financial problems such as calculating marginal costs or predicting total profit could now be handled with simplicity and accuracy. Engineers could calculate the bending strength of materials or the three-dimensional motion of objects. Our view of the world was forever changed with calculus.

After finding approximate areas by adding the areas of n rectangles, the application of this theorem is straightforward by comparison. It almost seems too simple that the area of an entire curved region can be calculated by just evaluating an antiderivative at the first and last endpoints of an interval.

The Fundamental Theorem of Calculus, Part 2

The Fundamental Theorem of Calculus, Part 2 (also known as the evaluation theorem) states that if we can find an antiderivative for the integrand, then we can evaluate the definite integral by evaluating the antiderivative at the endpoints of the interval and subtracting.

Then, substituting into the previous equation, we have

Example \(\PageIndex{6}\): Evaluating an Integral with the Fundamental Theorem of Calculus

Use Note to evaluate

Recall the power rule for Antiderivatives:

Use this rule to find the antiderivative of the function and then apply the theorem. We have

The region of the area we just calculated is depicted in Figure. Note that the region between the curve and the x-axis is all below the x-axis. Area is always positive, but a definite integral can still produce a negative number (a net signed area). For example, if this were a profit function, a negative number indicates the company is operating at a loss over the given interval. Figure \(\PageIndex{3}\): The evaluation of a definite integral can produce a negative value, even though area is always positive.

First, eliminate the radical by rewriting the integral using rational exponents. Then, separate the numerator terms by writing each one over the denominator:

Use the properties of exponents to simplify: 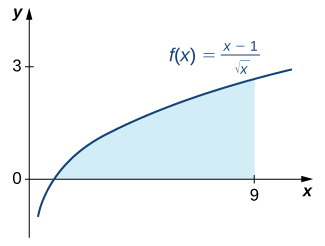 Use the power rule.

We need to integrate both functions over the interval \([0,5]\) and see which value is bigger. We are using \(∫^5_0v(t)dt\) to find the distance traveled over 5 seconds. For James, we want to calculate

Using the power rule, we have

Thus, James has skated 50 ft after 5 sec. Turning now to Kathy, we want to calculate

Kathy has skated approximately 50.6 ft after 5 sec. Kathy wins, but not by much!

Suppose James and Kathy have a rematch, but this time the official stops the contest after only 3 sec. Does this change the outcome?

Change the limits of integration from those in Example.

A Parachutist in Free Fall

Julie is an avid skydiver. She has more than 300 jumps under her belt and has mastered the art of making adjustments to her body position in the air to control how fast she falls. If she arches her back and points her belly toward the ground, she reaches a terminal velocity of approximately 120 mph (176 ft/sec). If, instead, she orients her body with her head straight down, she falls faster, reaching a terminal velocity of 150 mph (220 ft/sec). Figure \(\PageIndex{5}\): Skydivers can adjust the velocity of their dive by changing the position of their body during the free fall. (credit: Jeremy T. Lock)

Since Julie will be moving (falling) in a downward direction, we assume the downward direction is positive to simplify our calculations. Julie executes her jumps from an altitude of 12,500 ft. After she exits the aircraft, she immediately starts falling at a velocity given by \(v(t)=32t.\)

On her first jump of the day, Julie orients herself in the slower “belly down” position (terminal velocity is 176 ft/sec). Using this information, answer the following questions.

Some jumpers wear “wingsuits” (see Figure). These suits have fabric panels between the arms and legs and allow the wearer to glide around in a free fall, much like a flying squirrel. (Indeed, the suits are sometimes called “flying squirrel suits.”) When wearing these suits, terminal velocity can be reduced to about 30 mph (44 ft/sec), allowing the wearers a much longer time in the air. Wingsuit flyers still use parachutes to land; although the vertical velocities are within the margin of safety, horizontal velocities can exceed 70 mph, much too fast to land safely. Figure \(\PageIndex{6}\): The fabric panels on the arms and legs of a wingsuit work to reduce the vertical velocity of a skydiver’s fall. (credit: Richard Schneider)

Answer the following question based on the velocity in a wingsuit.

7. If Julie dons a wingsuit before her third jump of the day, and she pulls her ripcord at an altitude of 3000 ft, how long does she get to spend gliding around in the air

fundamental theorem of calculus
the theorem, central to the entire development of calculus, that establishes the relationship between differentiation and integration

fundamental theorem of calculus, part 1
uses a definite integral to define an antiderivative of a function

fundamental theorem of calculus, part 2
(also, evaluation theorem) we can evaluate a definite integral by evaluating the antiderivative of the integrand at the endpoints of the interval and subtracting