Acids are very common in some of the foods that we eat. Citrus fruits such as oranges and lemons contain citric acid and ascorbic acid, which is better known as vitamin C. Carbonated sodas contain phosphoric acid. Vinegar contains acetic acid. Your own stomach utilizes hydrochloric acid to digest food. Acids are a distinct class of compounds because of the properties of their aqueous solutions as outlined below:

It should not be hard for you to name several common acids (but you might find that listing bases is a little more difficult). Below is a partial list of some common acids, along with some chemical formulas:

What exactly makes an acid an acid, and what makes a base act as a base? Take a look at the formulas given in the above table and take a guess.

Sulfuric acid is a highly corrosive strong mineral acid with the molecular formula \(\ce{H2SO4}\). Sulfuric acid is a diprotic acid and has a wide range of applications including use in domestic acidic drain cleaners,[as an electrolyte in lead-acid batteries, and in various cleaning agents. It is also a central substance in the chemical industry. 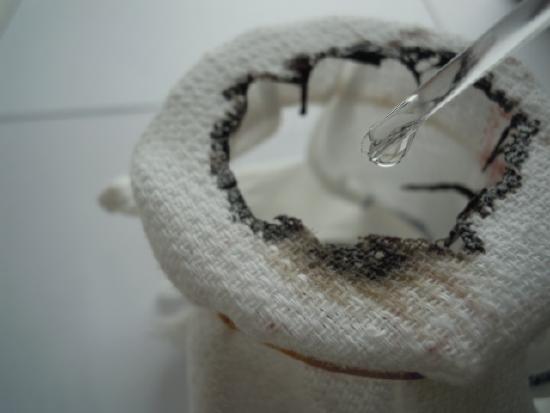 Because the hydration of sulfuric acid is thermodynamically favorable (and is highly exothermic) and the affinity of it for water is sufficiently strong, sulfuric acid is an excellent dehydrating agent. Concentrated sulfuric acid has a very powerful dehydrating property, removing water (\(\ce{H2O}\)) from other compounds including sugar and other carbohydrates and producing carbon, heat, steam. Sulfuric acid behaves as a typical acid in its reaction with most metals by generating hydrogen gas (Equation \ref{Eq1}).

Nitric acid (\(\ce{HNO3}\)) is a highly corrosive mineral acid and is also commonly used as a strong oxidizing agent. Nitric acid is normally considered to be a strong acid at ambient temperatures. Nitric acid can be made by reacting nitrogen dioxide (\(\ce{NO_2(g)}\)) with water.

Nitric acid reacts with most metals, but the details depend on the concentration of the acid and the nature of the metal. Dilute nitric acid behaves as a typical acid in its reaction with most metals (e.g., nitric acid with magnesium, manganese or zinc will liberate \(\ce{H2}\) gas):

Nitric acid is a corrosive acid and a powerful oxidizing agent. The major hazard it poses is chemical burn, as it carries out acid hydrolysis with proteins (amide) and fats (ester) which consequently decomposes living tissue (Figure \(\PageIndex{2}\)). Concentrated nitric acid stains human skin yellow due to its reaction with the keratin Carbonic acid is a chemical compound with the chemical formula \(\ce{H2CO3}\) and is also a name sometimes given to solutions of carbon dioxide in water (carbonated water), because such solutions contain small amounts of \(\ce{H2CO3(aq)}\). Carbonic acid, which is a weak acid, forms two kinds of salts: the carbonates and the bicarbonates. In geology, carbonic acid causes limestone to dissolve, producing calcium bicarbonate—which leads to many limestone features such as stalactites and stalagmites. Carbonic acid is a polyprotic acid, specifically it is diprotic, meaning that it has two protons which may dissociate from the parent molecule.

The reaction can be pushed to favor the reactants to generate \(\ce{CO2(g)}\) from solution, which is key to the bubbles observed in carbonated beverages (Figure \(\PageIndex{3}\)).

Formic acid (\(\ce{HCO2H}\)) is the simplest carboxylic acid and is an important intermediate in chemical synthesis and occurs naturally, most notably in some ants. The word "formic" comes from the Latin word for ant, formica, referring to its early isolation by the distillation of ant bodies. Formic acid occurs widely in nature as its conjugate base formate.

Citric acid (\(\ce{C6H8O7}\)) is a weak organic tricarboxylic acid that occurs naturally in citrus fruits. The citrate ion is an intermediate in the TCA cycle (Krebs cycle), a central metabolic pathway for animals, plants and bacteria. Because it is one of the stronger edible acids, the dominant use of citric acid is used as a flavoring and preservative in food and beverages, especially soft drinks. Acetylsalicylic acid (also known as aspirin) is a medication used to treat pain, fever, and inflammation. Aspirin, in the form of leaves from the willow tree, has been used for its health effects for at least 2,400 years. A brief summary of key aspects of several acids commonly encountered by students was given. Acids are a distinct class of compounds because of the properties of their aqueous solutions.