Given a function \(z=f(x,y)\), we are often interested in points where \(z\) takes on the largest or smallest values. For instance, if \(z\) represents a cost function, we would likely want to know what \((x,y)\) values minimize the cost. If \(z\) represents the ratio of a volume to surface area, we would likely want to know where \(z\) is greatest. This leads to the following definition.

If \(f\) has a relative or absolute maximum at \(P=(x_0,y_0)\), it means every curve on the surface of \(f\) through \(P\) will also have a relative or absolute maximum at \(P\). Recalling what we learned in Section 3.1, the slopes of the tangent lines to these curves at \(P\) must be 0 or undefined. Since directional derivatives are computed using \(f_x\) and \(f_y\), we are led to the following definition and theorem.

Therefore, to find relative extrema, we find the critical points of \(f\) and determine which correspond to relative maxima, relative minima, or neither. The following examples demonstrate this process.

We start by computing the partial derivatives of \(f\):

Each is never undefined. A critical point occurs when \(f_x\) and \(f_y\) are simultaneously 0, leading us to solve the following system of linear equations: 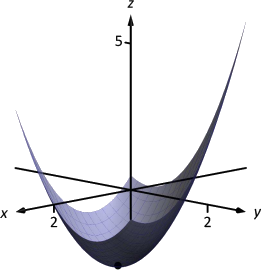 Figure 12.27: The surface in Example 12.8.1 with its absolute minimum indicated.

The graph in Figure 12.27 shows \(f\) along with this critical point. It is clear from the graph that this is a relative minimum; further consideration of the function shows that this is actually the absolute minimum.

We start by computing the partial derivatives of \(f\): Figure 12.28: The surface in Example 12.8.2 with its absolute maximum indicated.

In each of the previous two examples, we found a critical point of \(f\) and then determined whether or not it was a relative (or absolute) maximum or minimum by graphing. It would be nice to be able to determine whether a critical point corresponded to a max or a min without a graph. Before we develop such a test, we do one more example that sheds more light on the issues our test needs to consider.

Once again we start by finding the partial derivatives of \(f\): The critical point \((-1,2)\) clearly corresponds to a relative maximum. However, the critical point at \((1,2)\) is neither a maximum nor a minimum, displaying a different, interesting characteristic.

At a saddle point, the instantaneous rate of change in all directions is 0 and there are points nearby with \(z\)-values both less than and greater than the \(z\)-value of the saddle point.

Before Example 12.8.3 we mentioned the need for a test to differentiate between relative maxima and minima. We now recognize that our test also needs to account for saddle points. To do so, we consider the second partial derivatives of \(f\).

It would be nice if the following were true:

We first practice using this test with the function in the previous example, where we visually determined we had a relative maximum and a saddle point.

The Second Derivative Test confirmed what we determined visually.

We start by finding the first and second partial derivatives of \(f\): Figure 12.30 shows a graph of \(f\) and the three critical points. Note how this function does not vary much near the critical points -- that is, visually it is difficult to determine whether a point is a saddle point or relative minimum (or even a critical point at all!). This is one reason why the Second Derivative Test is so important to have.

When optimizing functions of one variable such as \(y=f(x)\), we made use of Theorem 25, the Extreme Value Theorem, that said that over a closed interval \(I\), a continuous function has both a maximum and minimum value. To find these maximum and minimum values, we evaluated \(f\) at all critical points in the interval, as well as at the endpoints (the "boundary'') of the interval.

A similar theorem and procedure applies to functions of two variables. A continuous function over a closed set also attains a maximum and minimum value (see the following theorem). We can find these values by evaluating the function at the critical values in the set and over the boundary of the set. After formally stating this extreme value theorem, we give examples.

Figure 12.31: Plotting the surface of \(f\) along with the restricted domain S.

We now find the maximum and minimum values that \(f\) attains along the boundary of \(S\), that is, along the edges of the triangle. In Figure 12.31(b) we see the triangle sketched in the plane with the equations of the lines forming its edges labeled.

We need to do this process twice more, for the other two edges of the triangle. Figure 12.32: The surface of \(f\) along with important points along the boundary of S and the interior.

This portion of the text is entitled "Constrained Optimization'' because we want to optimize a function (i.e., find its maximum and/or minimum values) subject to a constraint -- limits on which input points are considered. In the previous example, we constrained ourselves by considering a function only within the boundary of a triangle. This was largely arbitrary; the function and the boundary were chosen just as an example, with no real "meaning'' behind the function or the chosen constraint.

However, solving constrained optimization problems is a very important topic in applied mathematics. The techniques developed here are the basis for solving larger problems, where more than two variables are involved.

We illustrate the technique once more with a classic problem.

The U.S. Postal Service states that the girth+length of Standard Post Package must not exceed 130''. Given a rectangular box, the "length'' is the longest side, and the "girth'' is twice the width+height.

Given a rectangular box where the width and height are equal, what are the dimensions of the box that give the maximum volume subject to the constraint of the size of a Standard Post Package? 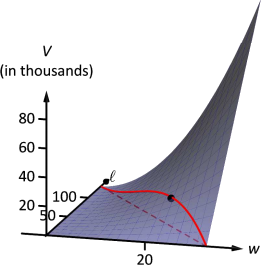 Figure 12.33: Graphing the volume of a box with girth 4w and length \(l\), subject to a size constraint.

The volume function \(V(w,\ell)\) is shown in Figure 12.33 along with the constraint \(\ell = 130-4w\). As done previously, the constraint is drawn dashed in the \(xy\)-plane and also along the surface of the function. The point where the volume is maximized is indicated.

It is hard to overemphasize the importance of optimization. In "the real world,'' we routinely seek to make something better. By expressing the something as a mathematical function, "making something better'' means "optimize some function.''

The techniques shown here are only the beginning of an incredibly important field. Many functions that we seek to optimize are incredibly complex, making the step of "find the gradient and set it equal to \(\vec 0\)'' highly nontrivial. Mastery of the principles here is key to being able to tackle these more complicated problems.