One may compare the conformal model with a telescope — it makes it possible to see the h-plane from the Euclidean plane. Continuing this analogy further, we may say that the following lemma will be used to aim the telescope at any particular point in the h-plane.

Consider an h-plane with a unit circle as the absolute. Let \(O\) be the center of the absolute and \(P\) be another h-point. Suppose that \(P'\) denotes the inverse of \(P\) in the absolute. The following observation says that the map \(X \mapsto X'\) respects all the notions introduced in the previous section. Together with the lemma above, it implies that in any problem that is formulated entirely in h-terms we can assume that a given h-point lies in the center of the absolute.

It is instructive to compare this observation with Proposition [prop:reflection].

According to Theorem 10.5.1, the map sends the absolute to itself. Note that the points on \(\Gamma\) do not move, it follows that points inside of the absolute remain inside after the mapping. Whence the \(X \mapsto X'\) is a bijection from the h-plane to itself.

Observe that according to lemma, \(OP_h \to \infty\) as \(OP \to 1\). That is if \(P\) approaches absolute in Euclidean sense, it escapes to infinity in the h-sense. 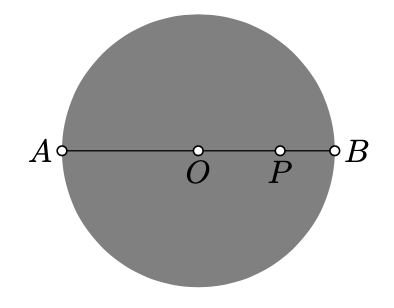 Taking the exponential function of the left and the right hand side and applying obvious algebra manipulations, we get that

Any h-circle is a Euclidean circle that lies completely in the h-plane.

Moreover, if \(O\) is the center of the absolute, then