This class may well be one of your first mathematics classes that bridges the gap between the mainly computation-oriented lower division classes and the abstract mathematics encountered in more advanced mathematics courses. The goal of this class is threefold:

The lectures will mainly develop the theory of Linear Algebra, and the discussion sessions will focus on the computational aspects. The lectures and the discussion sections go hand in hand, and it is important that you attend both. The exercises for each Chapter are divided into more computation-oriented exercises and exercises that focus on proof-writing. There are also some very short webwork homework sets to make sure you have some basic skills. You can already try the first one that introduces some logical concepts by clicking below: Webwork link.

1.2 What is Linear Algebra?

Linear Algebra is the branch of mathematics aimed at solving systems of linear equations with a ﬁnite number of unknowns. In particular, one would like to obtain answers to the following questions:

Linear Algebra is a systematic theory regarding the solutions of systems of linear equations.

This system has a unique solution for \(x_1,x_2 \in \mathbb{R}\), namely \(x_1=\frac{1}{3}\) and \(x_2=-\frac{2}{3}\). This solution can be found in several different ways. One approach is to ﬁrst solve for one of the unknowns in one of the equations and then to substitute the result into the other equation. Here, for example, we might solve to obtain

from the second equation. Then, substituting this in place of \( x_1\) in the ﬁrst equation, we have

Here, we can eliminate variables by adding \(-2\) times the first equation to the second equation, which results in \(0=-1\). This is obviously a contradiction, and hence this system of equations has no solution.

where the \(a_{ij}\)'s are the coefficients (usually real or complex numbers) in front of the unknowns \(x_j\), and the \(b_i\)'s are also fixed real or complex numbers. A solution is a set of numbers \(s_1,s_2,\ldots,s_n\) such that, substituting \(x_1=s_1,x_2=s_2,\ldots,x_n=s_n\) for the unknowns, all of the equations in System 1.2.1 hold. Linear Algebra is a theory that concerns the solutions and the structure of solutions for linear equations. As this course progresses, you will see that there is a lot of subtlety in fully understanding the solutions for such equations.

Before going on, let us reformulate the notion of a system of linear equations into the language of functions. This will also help us understand the adjective ``linear'' a bit better. A function \(f\) is a map

where \(x \in X\) and \(y \in Y\). (If you are not familiar with the abstract notions of sets and functions, then please consult Appendix A.)

In this setting, a system of equations is just another kind of equation.

A ``linear'' function on \(\mathbb{R}^{2}\) is then a function \(f\) that interacts with these operations in the following way:

You should check for yourself that the function \(f\) in Example 1.3.2 has these two properties.

which, for no completely obvious reason, has exactly two solutions \(x=-2\) and \(x=1\). Contrast this with the equation

Each equation can be interpreted as a straight line in the plane, with solutions \((x_1,x_2)\) to the linear system given by the set of all points that simultaneously lie on both lines. In this case, the two lines meet in only one location, which corresponds to the unique solution to the linear system as illustrated in the following figure: 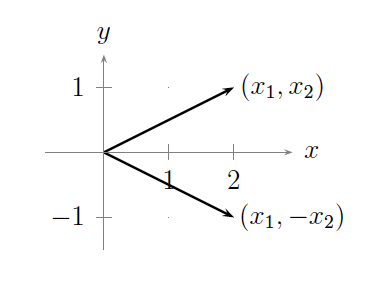 This example can easily be generalized to rotation by any arbitrary angle using Lemma 2.3.2. In particular, when points in \(\mathbb{R}^{2}\) are viewed as complex numbers, then we can employ the so-called polar form for complex numbers in order to model the ``motion'' of rotation. (Cf. Proof-Writing Exercise 5 in Exercises for Chapter 2.)

Linear equations pop up in many different contexts. For example, you can view the derivative \(\frac{df}{dx}(x)\) of a differentiable function \(f:\mathbb{R}\to\mathbb{R}\) as a linear approximation of \(f\). This becomes apparent when you look at the Taylor series of the function \(f(x)\) centered around the point \(x=a\) (as seen in a course like MAT 21C):

In particular, we can graph the linear part of the Taylor series versus the original function, as in the following figure: What if there are infinitely many variables \(x_1, x_2,\ldots\)? In this case, the system of equations has the form

Hence, the sums in each equation are infinite, and so we would have to deal with infinite series. This, in particular, means that questions of convergence arise, where convergence depends upon the infinite sequence \(x=(x_1,x_2,\ldots)\) of variables. These questions will not occur in this course since we are only interested in finite systems of linear equations in a finite number of variables. Other subjects in which these questions do arise, though, include

In courses like MAT 150ABC and MAT 250ABC, Linear Algebra is also seen to arise in the study of such things as symmetries, linear transformations, and Lie Algebra theory.

Both hardbound and softbound versions of this textbook are available online at WorldScientific.com.