Identify the terms, the coefficients, and the exponents of a polynomial

Polynomials are algebraic expressions that are created by combining numbers and variables using arithmetic operations such as addition, subtraction, multiplication, division, and exponentiation. You can create a polynomial by adding or subtracting terms. Polynomials are very useful in applications from science and engineering to business. You may see a resemblance between expressions, which we have been studying in this course, and polynomials. Polynomials are a special sub-group of mathematical expressions and equations.

The following table is intended to help you tell the difference between what is a polynomial and what is not.

The basic building block of a polynomial is a monomial. A monomial is one term and can be a number, a variable, or the product of a number and variables with an exponent. The number part of the term is called the coefficient.

The coefficient can be any real number, including 0. The exponent of the variable must be a whole number—0, 1, 2, 3, and so on. A monomial cannot have a variable in the denominator or a negative exponent.

Identify the coefficient, variable, and degree of the variable for the following monomial terms:
1) 9
2) x
3) \(\displaystyle \frac{3}{5}

A polynomial is a monomial or the sum or difference of two or more polynomials. Each monomial is called a term of the polynomial.

Some polynomials have specific names indicated by their prefix.

The word “polynomial” has the prefix, “poly,” which means many. However, the word polynomial can be used for all numbers of terms, including only one term.

Because the exponent of the variable must be a whole number, monomials and polynomials cannot have a variable in the denominator.

The table below illustrates some examples of monomials, binomials, trinomials, and other polynomials. They are all written in standard form.

When the coefficient of a polynomial term is 0, you usually do not write the term at all (because 0 times anything is 0, and adding 0 doesn’t change the value). The last binomial above could be written as a trinomial, \(14y^{3}+0y^{2}+3y\).

For the following expressions, determine whether they are a polynomial. If so, categorize them as a monomial, binomial, or trinomial.

In the following video, you will be shown more examples of how to identify and categorize polynomials. Evaluate a polynomial for given values of the variable

Change the subtraction to addition of the opposite.

Following the order of operations, evaluate exponents first and then multiply.

The following video presents more examples of evaluating a polynomial for a given value. Here are some examples of terms that are alike and some that are unlike.

Both expressions equal 18. So you can write the expression in whichever form is the most useful.

We can rewrite the expression as the product of the difference.

You may have noticed that combining like terms involves combining the coefficients to find the new coefficient of the like term. You can use this as a shortcut.

Combine the coefficients, 6 and 4.

Write the sum as the new coefficient.

Write the sum as the new coefficient. 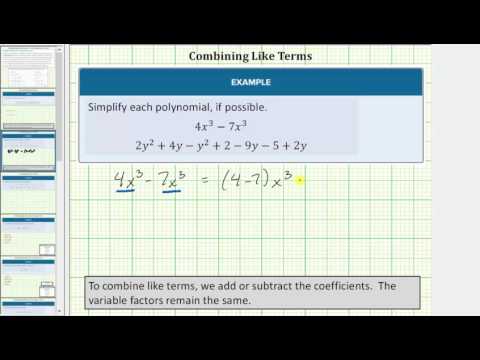 Polynomials are algebraic expressions that contain any number of terms combined by using addition or subtraction. A term is a number, a variable, or a product of a number and one or more variables with exponents. Like terms (same variable or variables raised to the same power) can be combined to simplify a polynomial. The polynomials can be evaluated by substituting a given value of the variable into each instance of the variable, then using order of operations to complete the calculations.