In previous sections we have used integration to answer the following questions:

In this section, we address a related question: Given a curve, what is its length? This is often referred to as arc length.

As we have done in the past, we start by approximating; later, we will refine our answer using limits to get an exact solution.

The length of straight--line segments is easy to compute using the Distance Formula. We can approximate the length of the given curve by approximating the curve with straight lines and measuring their lengths. Figure \(\PageIndex{2}\) zooms in on the \(i\,^\text{th}\) subinterval where \(y=f(x)\) is approximated by a straight line segment. The dashed lines show that we can view this line segment as they hypotenuse of a right triangle whose sides have length \(dx_i\) and \(dy_i\). Using the Pythagorean Theorem, the length of this line segment is \(\sqrt{dx_i^2 + \Delta y_i^2}.\) Summing over all subintervals gives an arc length approximation

As shown here, this is not a Riemann Sum. While we could conclude that taking a limit as the subinterval length goes to zero gives the exact arc length, we would not be able to compute the answer with a definite integral. We need first to do a little algebra.

As the integrand contains a square root, it is often difficult to use the formula in Key Idea 27 to find the length exactly. When exact answers are difficult to come by, we resort to using numerical methods of approximating definite integrals. The following examples will demonstrate this. This function was chosen specifically because the resulting integral can be evaluated exactly. We begin by finding \(f'(x) = x/4-1/x\). The arc length is

A graph of \(f\) is given in Figure \(\PageIndex{4}\); the portion of the curve measured in this problem is in bold.

The previous examples found the arc length exactly through careful choice of the functions. In general, exact answers are much more difficult to come by and numerical approximations are necessary.

This is somewhat of a mathematical curiosity; in Example 5.4.3 we found the area under one "hump" of the sine curve is 2 square units; now we are measuring its arc length.

This integral cannot be evaluated in terms of elementary functions so we will approximate it with Simpson's Method with \(n=4\). Surface Area of Solids of Revolution

We have already seen how a curve \(y=f(x)\) on \([a,b]\) can be revolved around an axis to form a solid. Instead of computing its volume, we now consider its surface area. 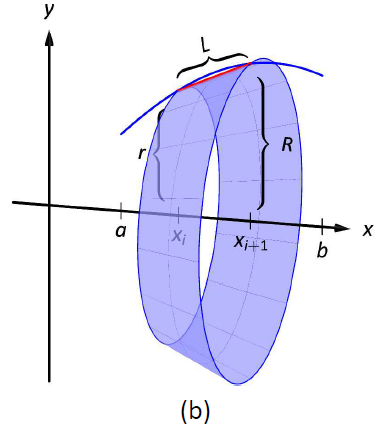 The length is given by \(L\); we use the material just covered by arc length to state that

for some \(c_i\) in the \(i\,^\text{th}\) subinterval. The radii are just the function evaluated at the endpoints of the interval. That is,

which is a Riemann Sum. Taking the limit as the subinterval lengths go to zero gives us the exact surface area, given in the following Key Idea.

Key Idea 28: Surface Area of a Solid of Revolution

Example \(\PageIndex{4}\): Finding surface area of a solid of revolution The setup is relatively straightforward. Using Key Idea \ref{idea:surface_area}, we have the surface area \(SA\) is:

The integration step above is nontrivial, utilizing an integration method called Trigonometric Substitution.

Example \(\PageIndex{5}\): Finding surface area of a solid of revolution Like the integral in Example \ref{ex_sa1}, this requires Trigonometric Substitution.

Our final example is a famous mathematical "paradox."

Example \(\PageIndex{6}\): The surface area and volume of Gabriel's Horn

Consider the solid formed by revolving \(y=1/x\) about the \(x\)-axis on \([1,\infty)\). Find the volume and surface area of this solid. (This shape, as graphed in Figure \(\PageIndex{9}\), is known as "Gabriel's Horn" since it looks like a very long horn that only a supernatural person, such as an angel, could play.) To compute the volume it is natural to use the Disk Method. We have:

Gabriel's Horn has a finite volume of \(\pi\) cubic units. Since we have already seen that regions with infinite length can have a finite area, this is not too difficult to accept.

We now consider its surface area. The integral is straightforward to setup:

By Key Idea 21, the improper integral on the left diverges. Since the integral on the right is larger, we conclude it also diverges, meaning Gabriel's Horn has infinite surface area.

Hence the "paradox": we can fill Gabriel's Horn with a finite amount of paint, but since it has infinite surface area, we can never paint it.

Somehow this paradox is striking when we think about it in terms of volume and area. However, we have seen a similar paradox before, as referenced above. We know that the area under the curve \(y=1/x^2\) on \([1,\infty)\) is finite, yet the shape has an infinite perimeter. Strange things can occur when we deal with the infinite.